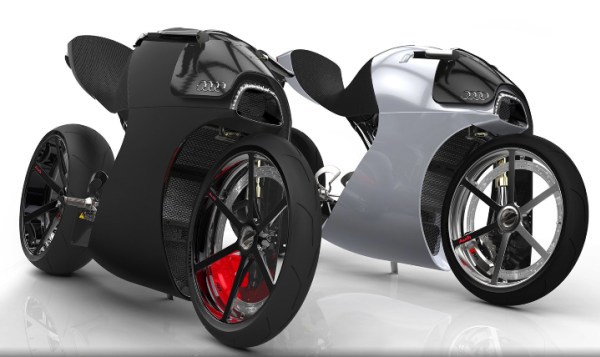 Posted at 17:51h in Uncategorized by dominic
0 Likes

Normally we only cover cars on this blog, but today we’re going to ignore that fact in favour of something a bit special. As you’ll be able to tell, we have a bit of a love affair with Audi. And for years there have been rumors of them launching a new superbike. Today we’re going to look at exactly what that might entail. A superbike is not something you expect from Audi and the thought of them actually entering the superbike market is pretty exciting for us but also probably pretty scary for competitors.

The man behind this awesomely futuristic design is Damien Vizcarra. Naturally, as a concept bike, it’s unlike anything we’ve ever seen before. And while it is unlikely to hit the road in this current design, it’s still something to marvel at.

The idea behind the design was to inject some life into the stagnant superbike market. Innovation isn’t a huge part of the industry and hopefully the design can bring some inspiration to manufacturers.

Damien aimed to bring Audi’s philosophy of “Truth in Engineering” to life with a simplistic, ergonomic and stylish design that paired the bike down as much as possible whilst still remaining as stylish as Audi.

Damien himself admits that the design is just that—a design. It hasn’t been thought about from a production perspective. That’s not to say we won’t see something like this in the future. The design has certainly gone down well in the motor industry and the thought of an Audi superbike is pretty tantalizing for some. How much we actually see—or live to see—is something that will have to be left to the imagination for now.

That being said, the design has been carefully thought about. It includes a host of integrated controls, Audi’s signature LED strip headlights and even a single arm swing mechanism much like racing bikes, which would make it quick and easy to change tires. The bike has also been designed to work on an advanced hybrid system, with two modes: street and performance. What’s more, the concept bike has also been said to combine a petrol engine with an electric engine to ensure the bike is as fast and environmentally friendly as possible.

It may never become a reality, but the Audi RR superbike concept is a beauty to behold.

We might not be in the superbike game, but we are in the supercar game. At Gerber Motorsports, we are experts are the maintenance, servicing, tuning and repair of your European sports car. With years of motor racing competition experience and a team of expert mechanics, few other performance car shops are better placed to handle your supercar needs. To find out how we can help, get in touch today by phone or email, or use the contact form on our contact page.